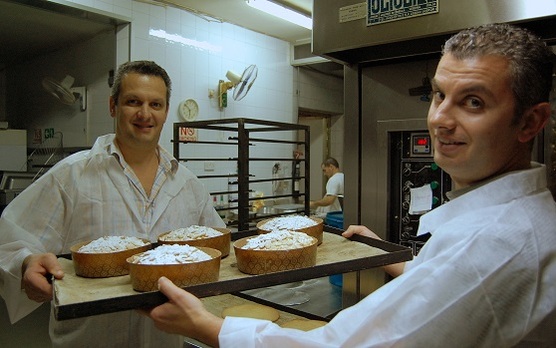 Geoffrey and Brian at work
Busy Bee Confectionery has been pampering generations of sweet-toothed customers with their delights for seventy-five years. Founded in 1933 by Vincent Friggieri, this establishment has been run by three successive generations of the Friggieri family. Over the years, Vincent’s humble confectionery on the Msida sea front expanded into a thriving catering establishment whose very name became synonymous with quality and excellence. The present directors, Geoffrey and Brian Friggieri, have taken over the management of Busy Bee from their father Edwin, who despite having retired, still maintains a regular presence and lends a hand when the occasion calls for his help.

Secluded behind the scenes of the elegant Busy Bee Cafeteria, the kitchen is the throbbing heart of the establishment, where all the gastronomic creations are prepared with meticulous care. The very name ‘Busy Bee’ seems to embody the philosophy that inspires Geoffrey, Brian and their staff to excel in their work.

To the Friggieri brothers, Busy Bee is a labour of love. They have been steeped in confectionery since they were of walking age.

‘We always regarded the confectionery as another family member,’ says Brian, as he shows me into the office.

Geoffrey, Brian’s senior by two years, nods in agreement. ‘Every weekend and school holiday, we followed Dad willingly, even though we came here to work. Dad was strict and believed that if there was a good start to any enterprise, success would follow.’

‘Are you a family of perfectionists then?’ I ask.

Brian grins. ‘Dad inherited that trait from Granddad. Both were very critical of their own work and were hard to satisfy.’

Having both worked in the confectionery since they were fifteen, Geoffrey and Brian have practically done all the jobs. Through years of induction under the care of their Dad, who in turn was trained by his father, they acquired the skills of pâtissiers and also valuable insight which today facilitates their managerial roles. I follow them through the kitchen, where they don white robes to handle the panettone dough, which is waiting to be baked. Their actions look almost choreographed as they deftly transfer blob after blob to the work area, garnish it with almonds and candied sugar and then onto the waiting oven racks. Their work is brisk and efficient. Such a long time spent working shoulder to shoulder has forged a deep sense of comradeship between the two brothers. 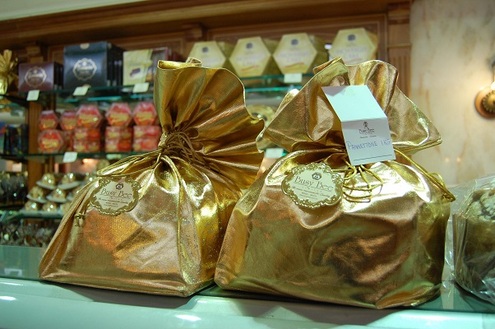 Busy Bee Panettone
I remark that as directors they take a very hands-on approach to running Busy Bee.

‘Nominally,’ says Brian, pushing the panettone rack into the waiting man-size oven, ‘our roles are related to management and organizational aspects. We are helped and advised in that by Dad and our sister.’

‘But when the workload is particularly heavy due to seasonal demands,’ adds in Geoffrey, ‘we step in to lend a hand to our pâtissiers. As Christmas approaches, Brian and I take on the job of making fine chocolates which will be in high demand.’

Geoffrey takes a mould and shows me how chocolates are made. With nimble movements, he runs a jet of molten dark chocolate into the mould. It is a difficult sequence to follow, let alone master, but with decades of experience at his back, he tackles the task effortlessly. Within the space of minutes he has prepared a regiment of fine, two-toned chocolates. I taste one and it immediately melts in my mouth to release the velvet texture and sublime taste of cocoa, blended with a rich cream filling. The aftertaste is a feeling of well-being.

‘Making sweets seems to run in your blood,’ I say, eliciting grins from both Brian and Geoffrey. ‘You remind me of the old tradition of the Master Pâtissier handing down his skills and secrets to his successors.

‘We were induced in a similar way to sweet making,’ says Brian, ‘so we are better placed to run Busy Bee, knowing exactly what each task involves.’

‘At the same time, we have adopted the modern idea of decentralization,’ adds Geoffrey. ‘We have devolved responsibility and reorganized the structure, so now we have various sections each under the leadership of a head of section.

Brian looks at the watch and points out that the panettone is almost ready. We head to the baking section and I get a glimpse of the panettoni through the glass panels of the oven Each dough has expanded to double the original size.

‘We always strive to be innovative,’ says Geoffrey as he takes out a tray, while Brian skewers each panettone with a long, pointed metal rod and hangs them on a rack to spend the night upside down. ‘Four years ago, we decided to stop selling imported pantettone and make our own. Its freshness is guaranteed as it only spends an average of two weeks on the shelf before being sold.’

‘We also like to keep up-to-date with innovations in pâtisserie by attending seminars and courses abroad,’ adds Brian while skewering another panettone. ‘Occasionally we also invite foreign pâtissiers over to Busy Bee so that they can test our equipment and give us their opinions. Usually we end up exchanging ideas, methods and recipes.’ 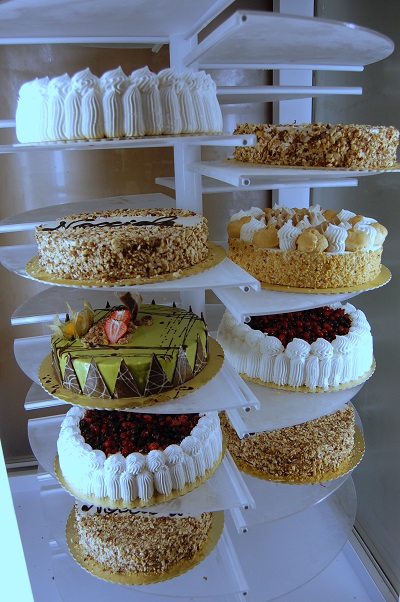 A selection of Busy Bee cakes
Busy Bee has a workforce of forty-four. Brian and Geoffrey choose their employees with care and are very proud that almost half of them have been working at their establishment for over 15 years.

‘We feel responsible for keeping the business moving in the right direction,’ says Brian, ‘because we would really dread the day when we would have to downsize our staff.’

‘Back in 1987 we carried out a radical refurbishment,’ adds Geoffrey, ‘and the cafeteria was extended. During the blessing ceremony I remember Granddad telling me: “You have to be very careful because you are running a boat with a glass bottom. The moment you stop rowing the glass will break and the boat will go under.”’

I follow Brian back to the confectionery to have a look at some of Busy Bee’s unique treats. He displays a vibrant cassatella. ‘This is our bestseller,’ he says with a hint of pride, ‘and its decoration has remained unaltered since Granddad’s days.’ Christmas delights line the displays, shamelessly flaunting their assets to attract the customer’s interest, like dandy peacocks during mating season. Freshly baked panettoni packed in gold gift bags, mouth-watering chocolates paraded in elegant gift boxes, time honoured Christmas cakes and Christmas puddings, all seem to invite attention. Quality and style are the common denominators of these confections, which seem to push the often undervalued concept of ‘Made in Malta’ towards a notion of excellence. Busy Bee’s delights definitely contend on an equal footing to high-quality, imported sweets, whose longer transport and shelf turnover times place them at a disadvantage to locally produced confections when it comes to state of freshness and conservation.

Geoffrey and Brian’s contagious enthusiasm is the force that has propelled Busy Bee’s sustained success during the last years. Thanks to their drive for continuous improvement and innovation, Busy Bee is set to maintain its prominent position amongst Malta’s finest confectionery and catering establishments.
Powered by