A Tribute to Scotland’s Storyteller

On January 8th, 2000, Nigel Tranter, Scotland’s foremost historical novelist of the last century, passed away. He left an impressive legacy of about 140 books by means of which he has popularized the drama-charged history of Scotland and made it accessible to millions of Scots and foreigners in an entertaining form.

Two people in particular have witnessed first hand the personality traits, beliefs and motivations that have shaped Nigel Tranter. Frances May Baker, Tranter’s only daughter has been at her father’s side during the high points of his career and the moments of deep sorrow. She has been his constant support, especially after the loss of her mother. Cameron Cunningham, a close friend and admirer, has known Tranter during the last 10 years of his life. While the author was still alive, Cameron set up a website celebrating Tranter’s life and achievements, and has collected, over the years, almost all editions of Tranter’s books. 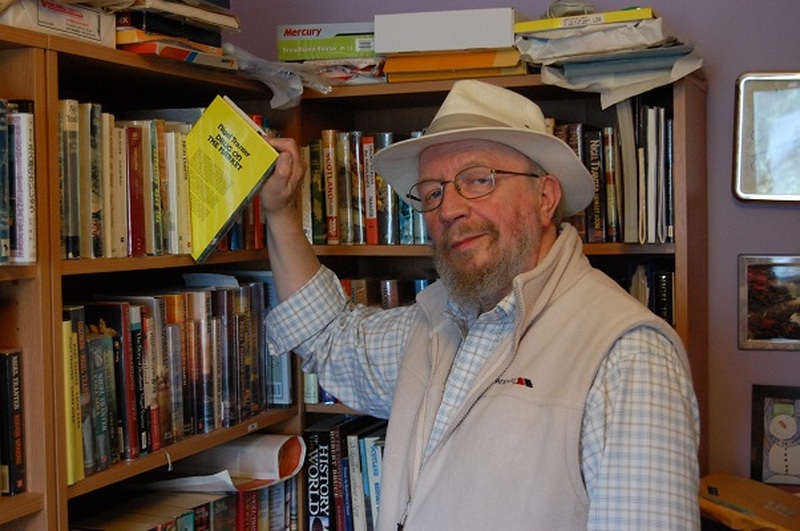 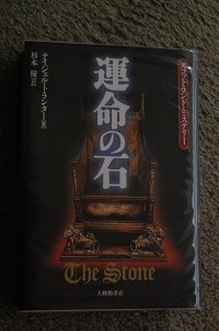 Nigel's book, 'The Stone' - Japanese translation
Nigel Tranter embodied the ideals of Scottish character. He was hard-working, hated waste and extravagance and was motivated by strong values. ‘My father was sociable, correct, generous and abstemious,’ says Frances May.

When Cameron Cunningham first met Nigel Tranter during a public lecture, he was surprised by his appearance: ‘I was amazed the first time I saw him because he looked so frail. However, when he spoke, there was a natural gentle authority in his voice; an unbelievable energy.

Despite the huge success of his novels, Tranter was an unassuming man. ‘He was very self-effacing,’ says Cameron, ‘and respected other people’s right to disagree with him. He was also frugal and careful with what he had. “Writers don’t have a pension,” he once said to me.’

Frances May recalls the ideals that spurred her father’s motivations as ‘loyalty, truth, patriotism, friendship and historical appreciation. ‘He loved Scotland,’ she says, ‘especially the history of its peoples, its rulers, the architecture of its castles, the mountains and the Hebrides. He liked simple things. He was very fond of hill walking and enjoyed being fit. He used to be very happy when, during fine summer weather, my mother used to walk out to meet him on his return from the daily walking/ writing trips, and perhaps take a tea-time picnic. He was very pleased to be able to live at Quarry House, our small cottage in Aberlady, having admired it for some time.

‘He enjoyed reading by the fire on a winter evening, or gathering wood for the hearth and chopping it up – never using coal. He attended Church every week and tried to live a Christian life. My father, however,’ adds Frances May, ‘hated excessive behaviour in people.’

Nigel Tranter had fostered a passion for castles since his teens, when he would cycle to fortified places and, armed with his notebook, take notes and draw sketches. He was intrigued by the people who had lived in them. ‘I started with the urge to find out about castles...’ he once said. ‘It was the people who built these castles that made Scotland’s story.’ Eventually, that urge spurred him to write historical novels. 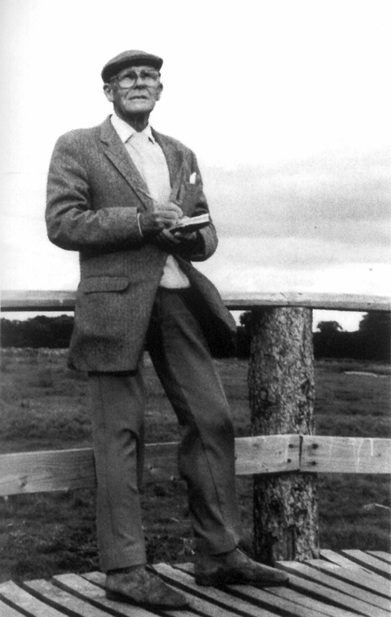 ‘Nigel did not have the option to study history or to pursue his dream of becoming a restoration architect,’ says Cameron. ‘At nineteen, he had to join the Insurance Company founded by his uncle to support his widowed mother and his sister.’

Between 1962 and 1971, Nigel Tranter wrote a sprawling five-volume series entitled The Fortified House in Scotland, after he had travelled the length and breadth of the country to visit and research the sites. He became so respected in that field that people started approaching him for advice on castle restoration, which he gave most willingly. Thanks to him, a number of Scottish castles were saved from demolition and restored.

According to Cameron Cunningham, the evolution of Nigel Tranter as a writer can be summed up into two distinct phases. ‘During the first 20 years of his career,’ says Cameron, ‘Nigel explored different writing genres such as romantic fiction, children’s books, westerns and non-fiction. The Fortified House series was a turning point in his career. He did most of the research in the aftermath of his son’s tragic death; his way of overcoming grief. After that, the historical novels came.’

Nigel Tranter set himself the task of writing about Scotland’s historical personages in the most accurate manner possible. He felt he had a responsibility towards all the Scots, not tamper with their heritage. Obviously, he would fill in the gaps in recorded history through his informed understanding of what might have actually happened. ‘One has to put flesh on the bones of recorded history,’ he once said.

Tranter’s prolific output was exceptional, considering the tremendous amount of detailed research involved in each of his novels. ‘He had a lot of self-discipline,’ says Cameron. ‘He would finish a book and start on a new book from the next day. He even kept on writing books during the War. He used to say that he had more ideas in his head than he could put onto paper.’

The culmination of Nigel Tranter’s career was brought about by the publication of the Bruce Trilogy. ‘When he wrote the Bruce Trilogy,’ explains Cameron, ‘the success was phenomenal. Over a million of each of the three books was sold worldwide.’

Tranter’s unassuming nature shined out even against the dazzling background of international success. ‘Storytelling has been born in me,’ he once said. ‘I can take no credit for it.’ Frances May recalls that her father remained very down-to-earth despite his outstanding success. ‘My father’s reaction to success was a gradual thing,’ she says. ‘He just seemed slightly more self-assured to me.’

Nigel Tranter scribbled his novels while he walked round Aberlady Bay and Gullane beach, immersed in the Scottish countryside that he loved so much. He would cover 10 to 12 miles every day, then return home to have lunch and type up what he had written. He barely made any alteration to his original text.

‘He did enjoy his life,’ says Frances May, ‘and often commented on how lucky he was to be able to be outside, walking and writing.’

‘Rothiemurchus is a magical spot, and quickly came to occupy a special place in their [the Tranter’s] affections. It is the archetype of every romantic concept of the Highlands: high tops on every side, deep forests, glittering lochs, the scents of pines; the shadow of deer flits in the forest and floats on the hills.’

‘He loved our family holidays in the Highlands,’ recalls Frances May. ‘All days were enjoyable. If we had managed a good, long walk through the forest and into the hills, Father would be happy.’ 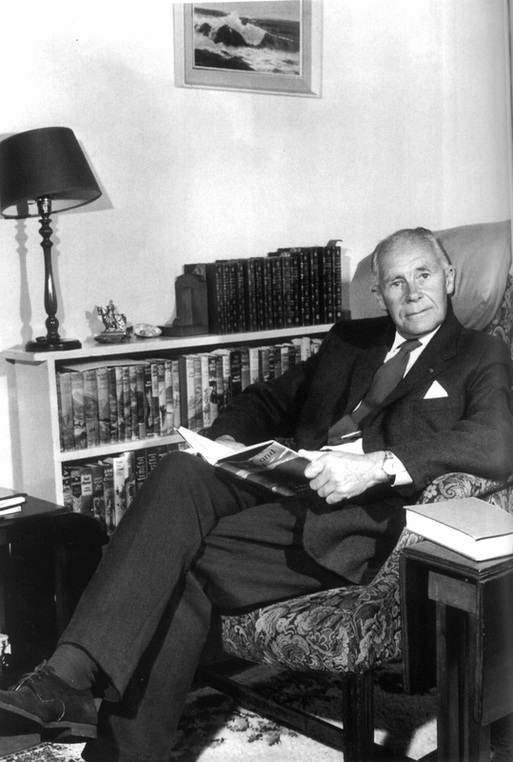 Nigel Tranter was very much a family man. He and his wife May brought up their two children according to traditional standards, which included frowning on waste, encouraging thrift and observing moral values. ‘He was very outgoing with other people,’ says Frances May, ‘and when my brother and I were young, he could occasionally be stern. My mother was fairly retiring but my Father enjoyed meeting people. He was stimulated by that, I think. He had many enthusiasms.’

Two stark events were to disrupt Tranter’s happiness and leave him deeply singed. ‘The saddest moments of in my father’s life,’ says Frances May, ‘were the death of my brother and then the death of my mother.’

Nigel’s son Philip was a renowned, record-setting mountaineer. Unfortunately, he lost his life in a car accident in 1966, while he was returning from a climb in Turkey. ‘Father was very proud of my brother’s achievements,’ adds Frances May.

The loss of his son was a shattering blow.

‘Nigel kept a table with all the memorabilia of Philip,’ adds Cameron, ‘diaries, a flag that his son had carried and a worn map. When Philip died, Nigel took all his notes and wrote them up in a book called No tigers in the Hindu Kush, which he published in Philip’s name. After we became friends, I once noticed that Nigel only had a tatty proof copy of that book. I found a copy in the USA and bought it for him as a gift. He said to me, “I haven’t read that book since I wrote it, but I’m going to sit down and read it.” ’

During 1979, thirteen years following his son’s death, Nigel lost his dearly-loved wife May, who had been his steadfast support both in his family life and his writing career. ‘After Mum’s death,’ says Frances May, ‘he tried to carry on with his routines, walking to write and typing it up, attending meetings and speaking in public. He stayed on in Quarry House as long as he could, but, obviously, he couldn’t do all the work my mother had done, so he simplified the garden maintenance and did minimum housework. Until I moved to Berwickshire with my husband, he come frequently to Athelstaneford and ate with us.’

Despite his losses, Tranter’s determination to keep on writing never waned. Writing was, in a way, a source of comfort.

Years later, when Cameron Cunningham met Tranter, he immediately realised what an agreeable man the author was. ‘Nigel was a gentle man and a gentleman,’ says Cameron. ‘He deserved a wider footprint and I could give him that footprint on the internet, which he himself would not do. When I showed him the website I had set up for him, Nigel told me, “Cameron, this is all beyond me! I’m still in the typewriter age.” ’

The archives stored in the website (http://www.nigeltranter.co.uk/), provide an invaluable source of information about Nigel Tranter’s life and his works at the touch of a button.  In addition, Cameron also set up an internet community of Tranter enthusiasts from all over the world, who have been actively discussing Nigel Tranter’s book and themes from Scottish history for years.

Ray Bradfield, in her biography, wrote that Tranter ‘does fervently believe that Scotland is a nation and it was, and is, the Scotland that fuelled his energy to her cause.’ Tranter served his country not only through his writing but also by being active in committees such as the Forth Road Bridge Committee, which eventually led to the building of the bridge that provided a lifeline for trade between northern and southern Scotland. Whenever a Scottish cause demanded action, Tranter would be at the forefront.

Nigel Tranter shall be remembered as the man who ‘has taught most Scots all the history they know’, as book reviewers often said of him, and perhaps, as the writer who has ‘made Scottish history known to the world’. The celebration of Nigel Tranter’s life and works is a fitting tribute to a man who has become a beacon for the appreciation of Scotland’s historical heritage.
Powered by